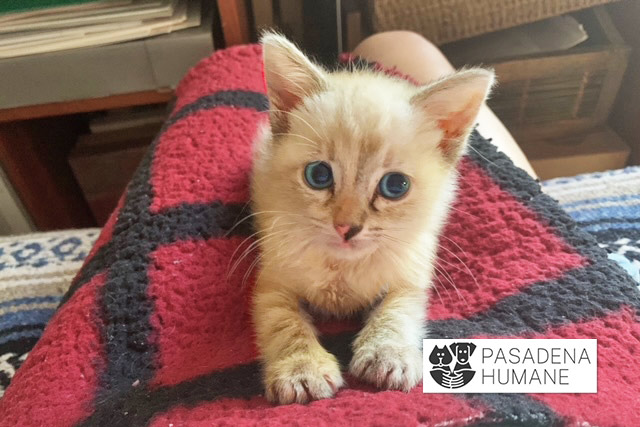 Little Pearl has a condition where her esophagus is scarred,

only allowing liquid through, not food!

Pearl was brought to Pasadena Humane at only 3 weeks old, abandoned by her mother. When she first arrived at the shelter, she was dirty, covered with fleas and suffering from a mild respiratory infection. As she began to grow and wean from formula to solid food, it became clear that there was a major problem. 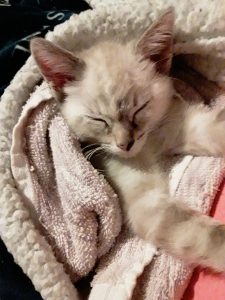 Pearl is at Pasadena Humane

Each time she attempted to eat, she would vomit up the food for hours. She started losing weight rapidly, unable to get the proper nutrition to grow. Upon evaluation, Pasadena Humane’s veterinary team found that there was a blockage in her esophagus that was not allowing the food to move into her stomach. 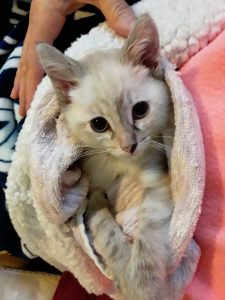 Pearl has been diagnosed with a condition known as Persistent Aortic Arch. You can read a summary about this condition HERE, and a longer analysis HERE. She has thick bands of scar tissue that are closing off her esophagus and preventing anything other than liquid from passing through. 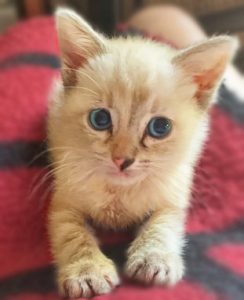 Pearl desperately needs surgery to remove the band of scar tissue. This major surgery will be dangerous and expensive, requiring this tiny kitten to be anesthetized and have her chest opened up – the obstruction of her esophagus is very close to her heart. She needs a CT-Scan and the surgery must be done by a specialist outside of the shelter to give her the best chance of recovery.

Pearl is counting on friends like you. By donating toward her surgery today, you’ll help give her the chance to grow into a healthy, happy cat. All donations are for Pearl and go specifically to Pasadena Humane, in Pasadena California, for her surgery. 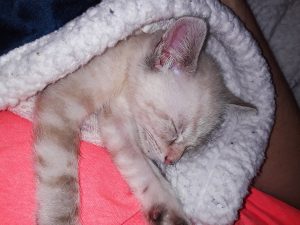 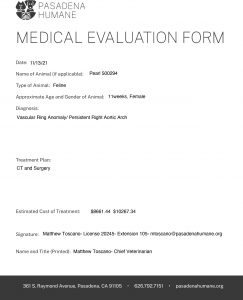