This beautiful pup has lost a leg and now needs surgery to remove his mast cell cancer.
Successful 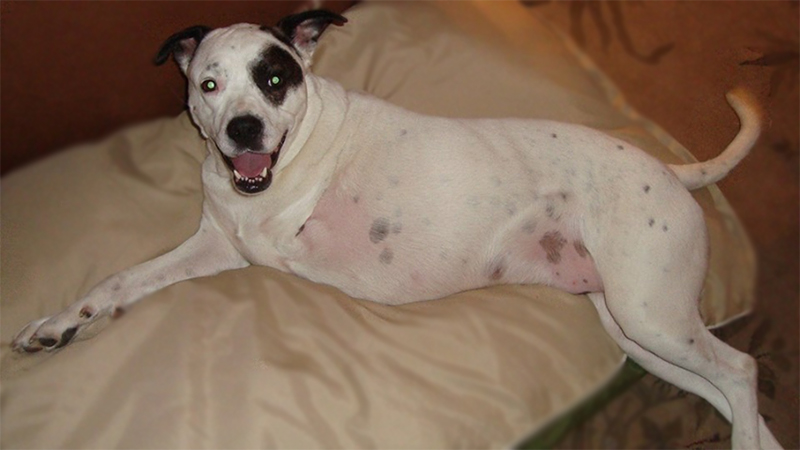 The letter from Ollie’s mom asking for help!

“As a volunteer foster mom for the humane society for years, I specialized in pitbulls with physical or emotional challenges. Sometimes they had both. Many damaged dogs came to our house & left with what they needed to help them find a permanent home. But, Ollie….Ollie was special. He instantly stole & broke my heart at the same time. 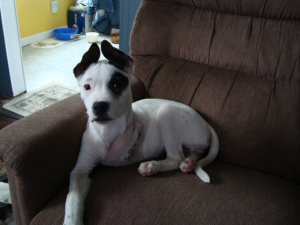 At just 3 months old, the little one had been picked up as a stray, missing most of a front foot. Humane society vets did their best but could not save Ollie’s foot. They took the entire left front leg and removed everything including the shoulder blade on that side.  He came to us the day after amputation. Alone & afraid. My heart melted. My own dog, a pit named Ursa (who looks amazingly like Ollie) took over. She became the mother he needed so badly. Of course he couldn’t nurse from her, but she gave him everything else he needed. Comfort, cuddling, companionship & a reason  to go on.  She knew just what to do. They’ve been inseparable ever since. 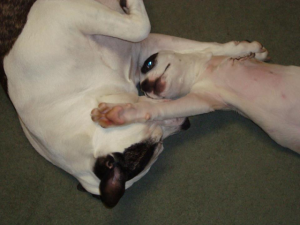 Ursa and Ollie (as a puppy) 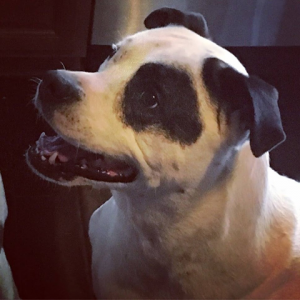 I didn’t really want to adopt another dog but Ollie needed us so much. He had been thru a tremendous lot for a baby. When it came time to end the foster & return Ollie to the shelter, I just couldn’t take him back.  We  wanted him to stay with us where he could be a complete dog with as normal a life as possible.  Special needs dogs don’t have the best chance of being adopted from shelters. And he was a pitbull – another strike against the likelihood of  adoption. And we loved him so much.
So, Ollie came to be part of our family.  That was 9 years ago. We’ve not regretted it for one day.
He developed into what people have described as “the world’s happiest dog.”  He lives a full life. He loves everybody & they love him back. And species doesn’t matter to Ollie either. Some of his best friends are cats.
And he loves Cherokee and Izzy, our two miniature horses.

He has had the best life we could give him.  He does, however, have very bad arthritis in his remaining front leg because dogs carry 65% of their body weight in front.  He got along okay with medication and struggling. But In the last year, he has developed a very large “fatty” cyst on his chest & another on his rear knee. Now he struggles even more.
On his vet visit last week, the vet checked a newly developed lump. The worst news: It is mast cell cancer. She advised surgery as soon as possible.  She checked him all over & he also has a cracked tooth. Another has such a growth on it that the tooth itself can’t even be seen. They must be removed.
I am a senior citizen with a very small income. And Ollie, he is the perfect dog – sweet, funny, mannerly, attentive, smart and more.
At my wit’s end, I am asking (well, pleading) for help in paying for Ollie’s surgery. Despite his challenges, this little guy gives his all, every time, to everyone & every critter meets.
Please help Ollie. He & Ursa are both goodwill ambassadors for pits. Thank you for considering a donation, from the bottoms of our canine & human hearts.” – Karen 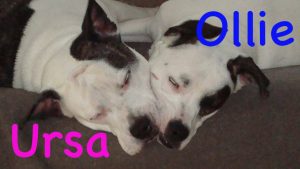