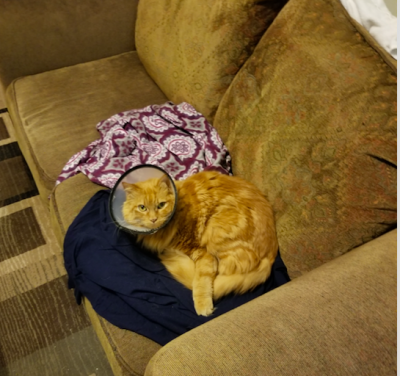 Oliver found a new vet who’s willing to do the procedure for less money! Sheryl was able to take Oliver to Bear Valley bet for the same surgery but a better price.

Poor Oliver was attacked by a possum a couple months ago which left him with some nasty battle scars. This past spring, Oliver suffered from a staff infection due to his wounds so his owner Sheryl took him back in to see the vet. They suggested getting Oliver a skin graft to allow his wounds to heal faster.

Sheryl adopted Oliver from a shelter in 2012 at 6 months. He was the perfect age to grow up with her other female Kitten, she couldn’t believe how soft he was and how much she immediately loved him. She’s heartbroken that she can’t afford to pay for anymore of his treatment since she’s currently out of work.

Oliver is a playful and joyous cat! All the bending and flexing of his knee is what makes it much harder for him to heal. Our hopes is that the skin graft will save that problem and he can jump around freely once again.