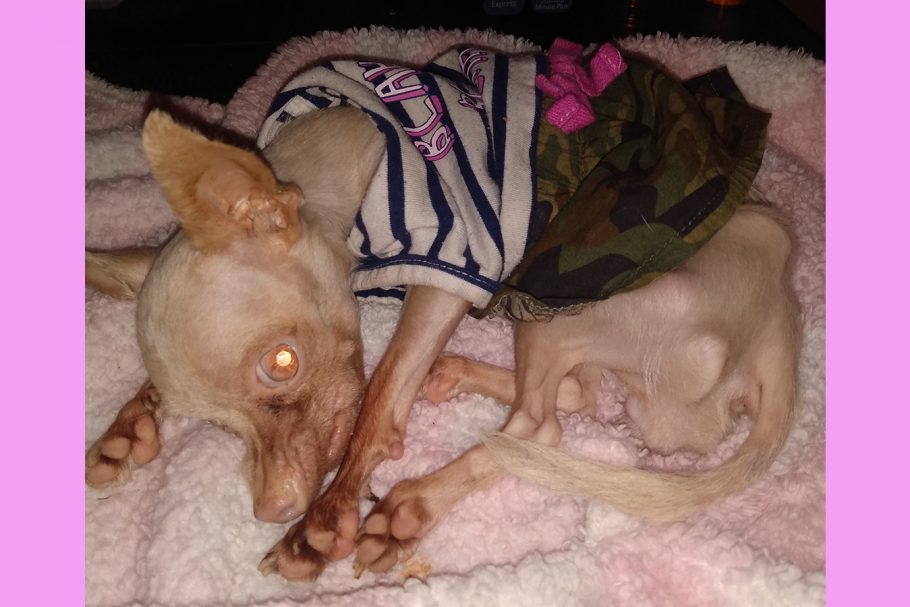 My name is Chiquis

I have stopped walking and no one knows why!

Healthy for the last six years, she suddenly has stopped walking!

(Note: updates below, scroll down)

Juan and his family got Chiquis about six years ago. A friend of a friend was moving to another country so Juan adopted her. They didn’t know much about her but thought since she was so small she must have been a puppy. But, after going to the doctor for a check up they realized she was about 7-8 years old. 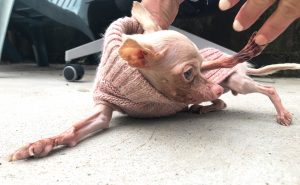 Now, over the last few months she is walking less and less. She just lays down and has to be carried to and from her bed. Also, her left front paw and wrist are very raw and red. 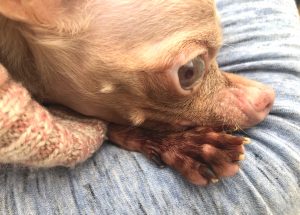 Juan says she is like a baby and he has had to learn her cries. She has different cries for pee, poop and food.

Chiquis has lost a lot of muscle mass from not walking. It is urgent that she get care soon, but we have to know what is wrong! Juan has paid over $1,000 already for testing to see what is wrong and nothing has come up. The doctor is now requesting an MRI to see if they can determine if there is a spinal injury. Juan says there wasn’t any trauma to cause her to hurt her spine, but it could be from an old trauma. 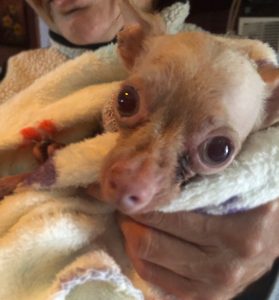 Estimate for the MRI: 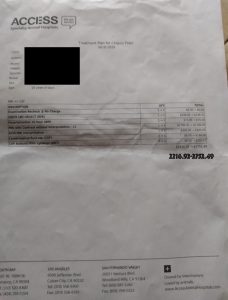 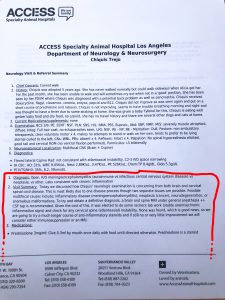 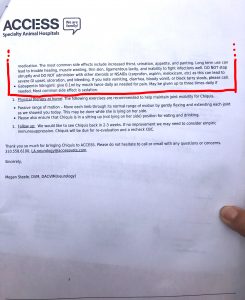 NOTE: We (Free Animal Doctor) are taking her to see an experienced vet Tuesday afternoon (3/17) for an analysis of what we can do for her while we work on raising the money for her MRI.

We took her to West Main Animal Hospital in Alhambra, CA to see Dr. Frics. She has already been to Access Vet to see a neurologist, who wants to do an MRI, which is what we are raising money for. Our visit today to Dr. Frics was to see what could be done for her in the meantime, if anything, and to check on her paw and some other issues.

To summarize, there isn’t much that can be done for her. Dr Frics gave her an extended prescription of steroid medication. He said her paw is fine. The good news is that he is sure she is not painful. She has something wrong in her neck vertebrae which is causing the partial paralysis, etc… but she is well cared for. She eats, she isn’t in pain. So it is not necessary to put her to sleep.

Dr Frics does wonder about the MRI. She is only 1.9lbs and probably cannot survive anesthesia… which would usually preclude an MRI. We will be talking more with Access to find out about this issues.

Her owners are caring for her very well, and they have seen minor improvement with the steroids, so perhaps as they continue, there will be more improvement. But in all likelihood this is about as good as Little Chiquis will get. Though there is the possibility of steroid injections, again with the Neurologist at Access, and we will be looking into that more this week and updating.

Thank you to all the people asking us for an update, and apologies for it taking so long today!