Bear needs out! He's stuck at the vet, needing his bill paid.
Successful This campaign successfully reached its funding goal and ended 4 years ago
18,400% Funded
Time left to donate 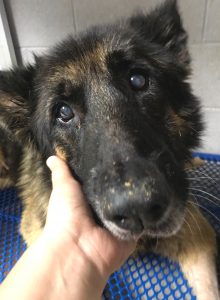 Let’s get Bear out!

Bear is an older German Shepard that was taken in by Happy Hearts Rescue. He was languishing in the Moreno Valley Animal Shelter, not walking and in pain.

The rescue got him out and to a vet that did a basic examination, and then suggested that he see another vet as Bear’s condition was to difficult for them to deal with. There was no charge.

Next Bear was taken to SoCal Animal Hospital in La Puente. Here Bear got more treatment. It was determined he probably has a slipped or damaged disc in his back, that has left him paralyzed in the rear. He cannot pee on his own, and cannot stand up. The vet has been treating him and he is still hospitalized there, but he needs to see a spinal specialist next. 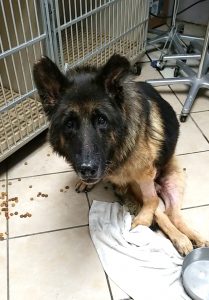 o what is the problem?

Unfortunately the rescue is out of funds and the vet will not release Bear without payment. The bill is $700. What we want to do is raise enough money to pay Bear’s current bill and then get him a consult with the spinal specialist.

Bear may be a candidate for surgery. He may not even need surgery! Of course, it may also be that his condition is too poor, and he will need to be humanely euthanized. But we want him to get the best chance by seeing a spinal specialist before any decision is made!

Can you help Bear? This fundraiser is to get him out of the vet he is in and into a consult with an excellent spinal surgeon in Orange County. The rescue has raised a little money, including at a GoFundMe, but they just do not have enough! All funds will only be used for Bear, and if the funds are not used, will be refunded! Thank you!!

Sadly Bear suffered from a series of seizures on Sept 26th and did not survive them. He has passed away.
We are arranging refund for all donors. Donors have been emailed at the email used when donating. If you did not receive this email, please email RYAN at ryan@freeanimaldoctor.org with the Subject: BEAR REFUND.