Emergency surgery was needed to save her life! She had a blockage that would have killed her.
Successful 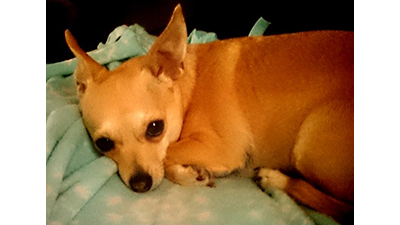 After years of being told to adopt this little gal, Consuelo finally gets her

Consuelo has been in the rescue world for a long time and is known to help those dogs who are traumatized and not socialized. 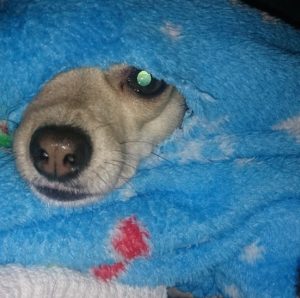 Abby was pulled from a shelter just in time by Woofaste Dog Cooperative in Santa Fe. For two years Abby lived with her foster before it was time for Consuelo to bring Abby to her furever home.

Here is Consuelo’s story on how she met Abby-

“Abby was so terrified and traumatized with a look of total fear that most people were not interested in her. A dear friend to both Maureen 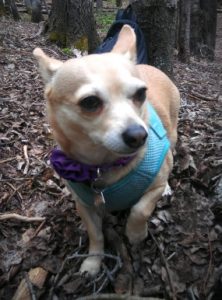 (Abby’s foster) and me saw pictures of Abby and read her story. She called Maureen and said you need to call Consuelo, this dog needs to be with her, she is the only one that can help her and heal her. They both called me and encouraged me to adopt Abby. I already had two dogs and could not afford another one. Maureen worked with Abby and finally got her to be able to walk on dirt as she had only been in a cage all her life breading. Abby was adopted out two times. Both times she was returned to Woofaste as Abby was always hiding, shaking and would not eat. In the meantime two years passed and both my dogs I had for over 15 year passed of natural cause six months apart. . I adopted a mix breed three months earlier from Maureen after my first dog passed, Akia. Once the my second dog passed Akia was sad so I took him with me to find him a new friend at a Woofaste event. Akia and I looked at many dogs and walked with them, but I didn’t feel they were the right fit for us. On our way back to the car Akia stopped at a cage with  Abby in it. He stayed looking at her. I look at her and thought, “Wow, Akia, she sure is a beauty. No wonder why you like her”. I proceeded to open the cage to look at her, she jumped into my arms and Maureen was running towards me yelling, “No! Don’t open that cage – she will take off”. By the time Maureen got to me, I was squatted down with Abby in my arms and Akia and Abby were licking each other’s face. Maureen stopped looked at the three of us and laughed. Maureen said, “Of course… This is the dog I have been asking you to take for the last two years. She really does belong with you”

Akia and Consuelo took Abby home where after six months, Abby has started to wag her tail, play and get back to acting normal. 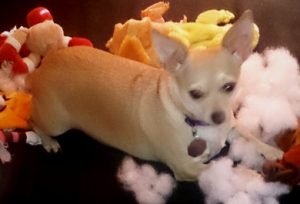 Abby loves to sunbath and hang out under the apricot tree

On December 2nd, Abby had to have emergency surgery to remove an obstruction which was an apricot seed. Of course, Consuelo had no idea that Abby would or could eat them. The apricot tree is actually located in the neighbors yard so, Consuelo has spoken to them about making sure they cut them and contain the tree. The neighbors have been very cooperative. Consuelo is also keeping an eye out on any fruit that falls.

Consuelo had to pay $2,000 in September for her smaller chihuahua to be hospitalized and now Abby is sick.

Consuelo put the vet bill on credit and the vet is willing to take payment from us until the end of the year.