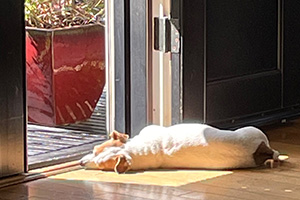 Bob is hot, the weather is hot, everything is hot.

So Bob wanted us to bring you the good news of a dog that is no longer hot! Nor lost! Nor scared! Nor in danger..... you get the point. Here is the story of Butler, who was found 30 miles from his home!

Free Animal Doctor has teamed up with rescuer and master-trapper Faith Easdale to rescue more stray dogs. We got a call, a small poodle/maltese type dog had been seen for a couple days, running around scared at a truck stop off the 15 fwy on the way to Las Vegas!

The little guy seemed to want to approach people, but was also too skittish. He seemed to be looking for his people, but would run off when approached, and there was a busy road, with lots of trucks coming in and off the freeway.

We went out at 2pm and found that other than the truck stop and a McDonalds, there was nothing else around but sand, rocks and strangely enough an encampment of homeless people. We spotted the dog, and began to set traps, but unfortunately some of the campers were roaming around, acting weird, probably on drugs. We noticed at least one car that seemed to be making transactions out the window to people.

So we set our traps, hoped people would eventually move along, and waited. Later in the evening a couple of sheriff's showed up and drove around. This sent people off, and the area got quiet. As the sun set we marveled at the area... there is no water. It is bone dry, dusty, rocky and there are coyotes around. We heard some.

Fortunately, in the dark, under the dim light coming off the truck stop, we heard a magic sound... at about 9PM a trap door had snapped shut, and when we ran out to check, there was the dog, safe in the trap!

We took Butler to quarantine kennel area. We got him water, and food. He was friendly. He slept. And in the morning, we scanned him and he had a chip! We got ahold of his owners, and they told us he had been missing for four days. But here is the thing, they lived over 30 miles away in a different county!! They live in LA county, but we had found Butler far from them in San Bernardino County.

There was no way he had walked there. Had someone stolen him? Maybe they stopped for gas and he escaped the car? Maybe someone had him at the encampment? We don't know. But listen to him in the video above, how happy to be HOME!

We doing more of these rescues, almost daily. Like the Daily Bob! 🙂

You can join us in these efforts. Please consider either a donation below in the red box, or you can Venmo @F-A-D at this link: DONATE with VENMO